The Nature of Poverty

Hello and welcome to our first blog.  My name is Hugh Pilcher and I have the title of International Coordinator but I am really the manager of this organisation and God is the director.  I take my orders from Him and it is my job to carry out His will and plans.  So I am accountable to Him.  We also have a local Executive Board, a Board of Directors in the UK as well as my assistant and all of those will let me know if they think something wrong!  Hallelujah!

But this work is God’s idea and it is His burden to help very vulnerable children which drives everything we do.

So for this first blog I wanted to share something of the nature of poverty which I see here in Uganda which even many other Ugandans do not realise exists in their country.  I will also tell you about some of what we have achieved this year so far.

I was recently asked to go and see a lady who is looking after several children.  So I went and met her, her name is Regina.  She is a widow and the grandmother of five children who live with her.  The father died and the mother left the children and went away four years ago.  Since Christmas Regina, who is 65, has had problems with her legs and has not been able to work this year.  When I say work I don’t mean regular employment but she was earning a little money washing clothes 3km away in Kigumba town.  Hard work for a lady in rural Uganda where the life expectancy for women is 64.

How does she survive and feed five children?  Well I suspect the neighbours give her a little bit of food and maybe she grows a staple crop like cassava with some spinach near her mud brick house.  So they will be eating cassava or maize flour dough with greens and that will be once a day.  Mid-morning they might have some weak black tea with another piece of cassava.  They won’t be getting much protein at all.  There certainly isn’t any money to send the children to school.  Regina’s situation is not unusual at all.  There is no government help, Uganda is not economically ready for that yet.  Even after being in East Africa for twelve years I still don’t know how the very poor survive.  How do they do it?

I know about 15 cases like Regina and her children, what I call serious cases, who are not able to find funds to send the children under their care to school.  I have been asking God what to do since I and the team are here to do His work.  In a change of approach we have written a project proposal which would train the female guardians in tailoring (nearly all the guardians of the most poor children are female).  This will give them a livelihood from which they should earn enough to send their children to school without further intervention from Jesus Loves the Little Children.  The challenge is that it will cost £4,000/$5,500!  We will see what happens.

But I wanted you to understand the depth of poverty some people find themselves in and why it is a poverty trap.

This year we have 41 children in school.  Three are in Secondary and the rest in Primary School.  Once a month we meet all the children (apart from seven who are boarding) for the ‘Jesus Club’.  This is a fun time together where they can relax, make friends, grow in confidence and learn about God and Jesus.

Sometimes these children become ill and although it is not our official policy if their guardian really has no money, we will come in and help with medical costs.  We cannot just let children die.  One of our young girls had typhoid, another had dysentery and another malaria.  They are all ok now, praise God.  The poorest countries do seem to have the worst diseases.

With our other Programme for Children with Special Needs we continue to welcome new children.  They come from further and further away as their guardians hear about the assistance we give, all with the love of God.  We have had to cap the amount of travel cost we reimburse to each child as the total bill for each fortnightly club gets bigger and bigger.

God has told us to concentrate our group time on those children with mental issues and/or severe physical handicaps.  We do send children, such as those who are deaf, to appropriate schools when we have sponsorship and a child is able to attend.

In January and February we sent two children with severe Cerebral Palsy to the Cheshire Home at Katalemwa, Kampala for concentrated treatment.  Although it is a great place the results were a little bit disappointing with little progress for them.  There is no easy fix for these severely handicapped children unless God intervenes with the miraculous.

In March we sent little Kemisa and her mother off to a very good hospital in the north called Lacor.  Kemisa had a range of serious internal health issues but she returned much better.  The Muslim parents were extremely grateful and brought a gift of a live chicken to say thanks.  (-:

And finally we gave William an adapted tricycle which will greatly help his life in the village.  William has never been able to walk and always shuffles around on his bottom-even playing football in such a manner-but now he can sit up and move around with dignity.  Praise God!              William, his father Peter and me

Yesterday when out visiting one of our children with special needs Pastor Shadrach and I got a bit lost.  But after asking directions a man told us that he has a child with special needs too.  We went to investigate.  We found a boy with severe disabilities lying in a mud hut.  The parents told us that he stays there all the time even defecating on the floor.  We urged them to bring him to our Club which is for just such children.  It seems God caused us to be lost so that we could meet this boy whom God surely loves dearly.             God bless you, Hugh. 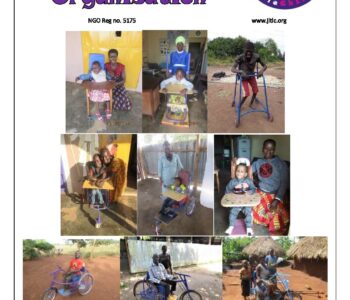 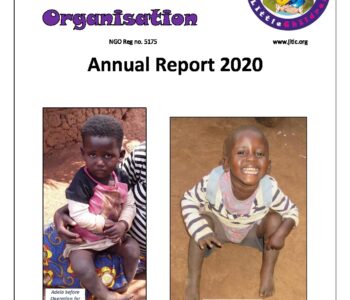